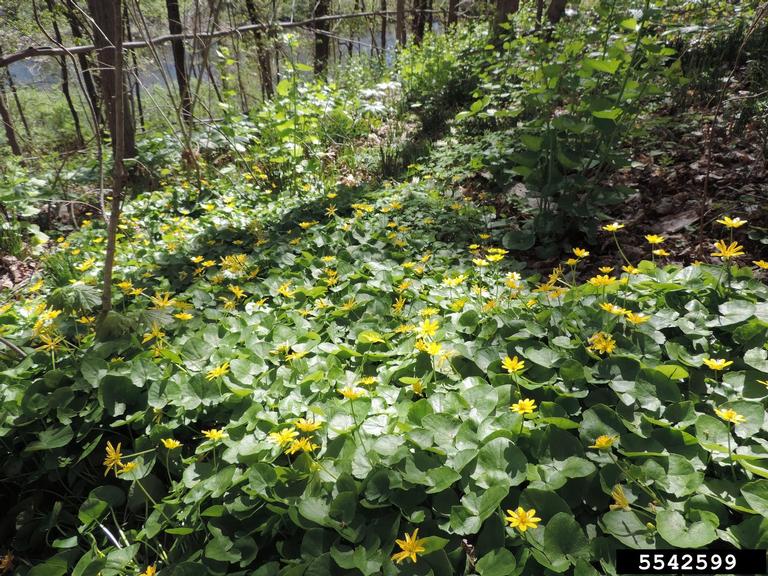 This month we are looking at lesser celandine (Ficaria verna).  This is a plant which most of you likely have seen in the wild but may have optimistically identified as our native look-a-like, marsh marigold (Caltha palustris).  Hopefully, after this you will be able to recognize the difference and make observations to help us better understand the current distribution within our region.

Native to Europe, northwest Africa and southwest Asia it was introduced to the United States in the late 1860’s as an ornamental plant.  It has a wide range of growing conditions, from wet shade along woodland stream banks to sun filled lawns where it is aggressive enough to outcompete turfgrass.  This wide range makes it a nuisance in both our manicured landscapes and our managed forests.  It is in our riparian areas that the concern of impact to natives is greatest, where vast monocultures of lesser celandine is forcing out native spring ephemerals that are trying to occupy the same niche.  Do you enjoy seeing spring beauty (Claytonia virginica) or yellow trout lily (Erythronium americanum)?  You may be seeing less of them in the future, as these are some of the plants which will not be able to compete with lesser celandine.

So, what does this aggressive invasive look like?  Lesser celandine is an herbaceous perennial plant with dark green, kidney shaped leaves with wavy edges that emerge in February.  The flowers begin to bloom in March and April, with 7 – 12 bright yellow petals each and are up to 3 inches in diameter.  The plant then goes dormant again by June, not to be seen again until next spring.

There are many similarities between lesser celandine and native marsh marigold.  Both have kidney shaped leaves, both occur in moist soils and both are low growing with bright yellow flowers.  Though the flowers look similar at a distance, they have distinct differences when seen up close which can aid in identification.  Marsh marigold has 5 – 9 petal-like sepals (yellow in color as seen in the picture), while lesser celandine has 7 – 12 yellow petals which are narrower than the marsh marigold and have GREEN sepals underneath the petals.  If no flowers are present, look for bulblets forming at the nodes along the stem- if they are present it is lesser celandine; marsh marigold does not have these. 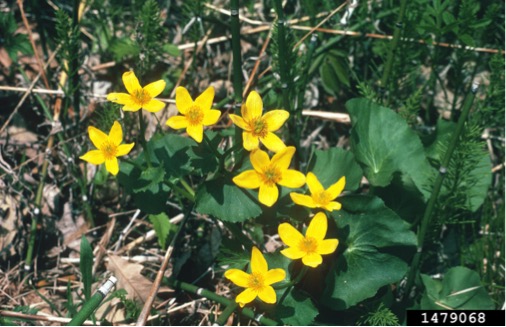 If the talk of sepals and bulblets starts to make your head spin, do not to worry.  Identifying the plant based on the timing of the life cycle will usually lead you to the right identification.  Marsh marigold is typically a month behind lesser celandine.  This means that if you are seeing the flowers in March or early April it is very likely lesser celandine.  If you are seeing the flowers in late-April, May or June, it is very likely that it is marsh marigold.  This can be a good way to quickly get an idea of what the population you’re seeing is.  If you think you’re seeing lesser celandine or marsh marigold snap a photo using iNaturalist and let the curators help you with your ID!

As of this writing on March 26th, lesser celandine is blooming in northern New Jersey.  So as spring establishes itself and you’re knocking the winter rust off with some hikes, be on the lookout.  If you do find lesser celandine during your travels, we encourage you to report them through either iMap, www.nyimapinvasives.org, or iNaturalist, which can be downloaded as an app to your smart phone.  Every observation is valuable in helping us understand the distribution in our area no matter how big or small the site is.