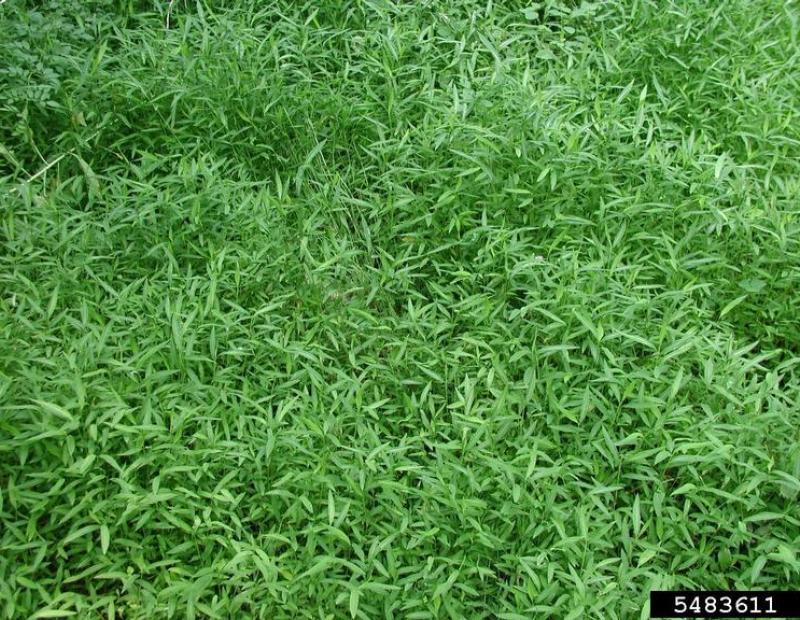 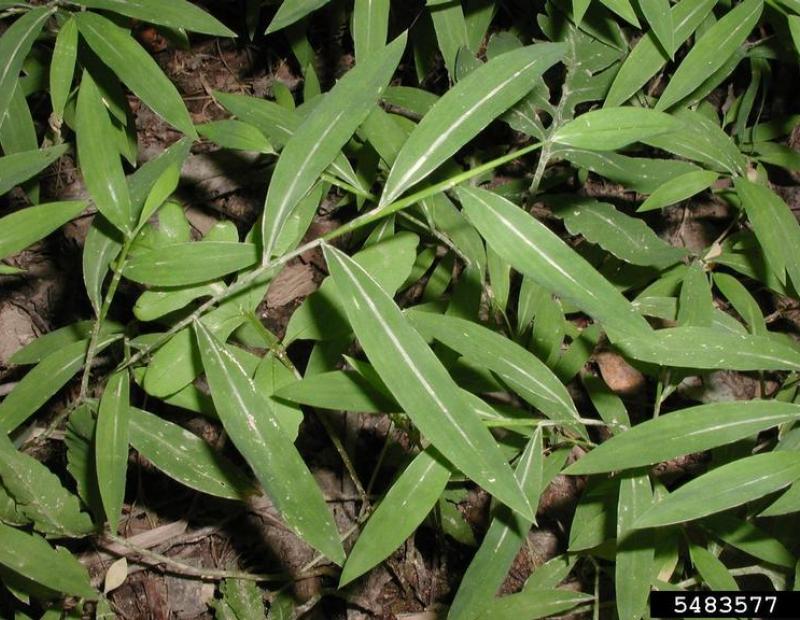 Note the silver stripe growing down the center of the leaf.  The leaves are 1-3 inches long, asymetrical, and are arranged alternately along the stalk of the plant. 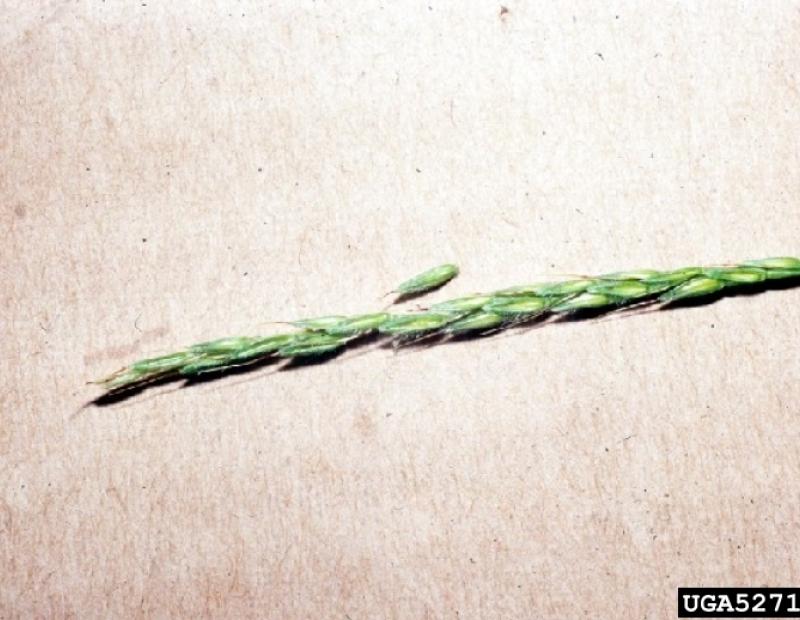 These plants proliferate due to the large quantity of seeds they produce which are transported predominantly by animals, including humans. 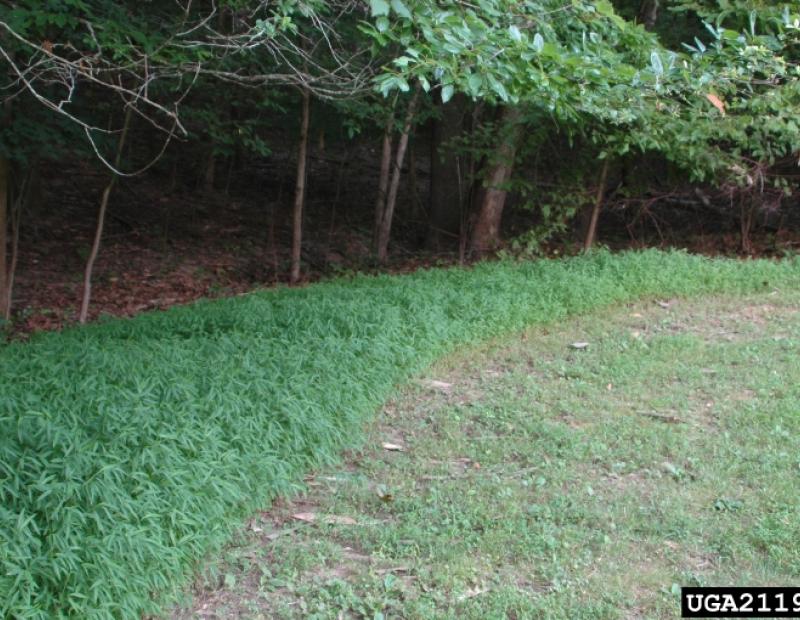 These plants establish themselves frequently in dense stands in disturbed locations. 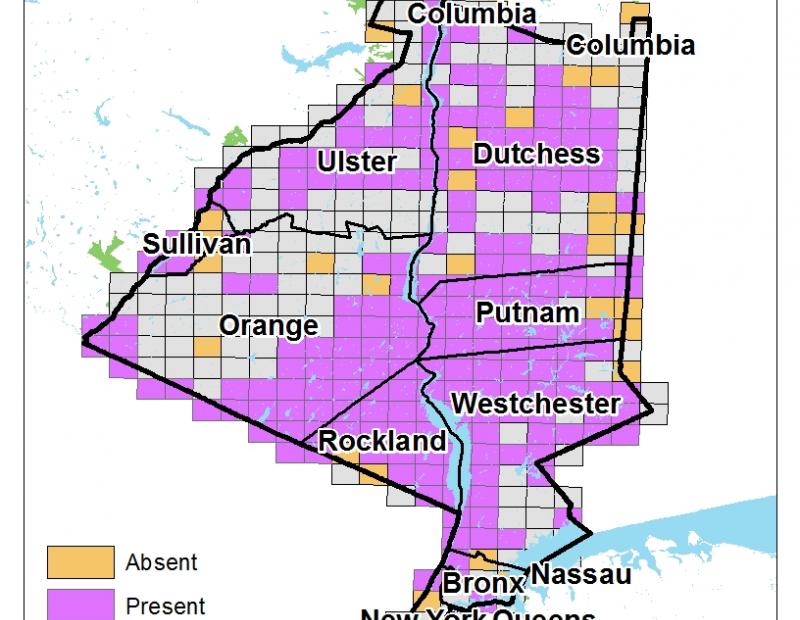 An annual grass that grows to 1 m or more (but often shorter), often forming dense stands. Leaves with smooth edges, often with a glossy, light midrib, spaced along the stem. Stems are thin, tend to sprawl, and may branch at the base into several stems. Roots are shallow and pull out very easily; lower stem nodes may produce stilt roots, hence the common name. Dead grass often persists in winter as a conspicuous thatch layer.

Introduction History
Stiltgrass is native to parts of Asia and the Caucasus Mountains, and is now found around the world. It first appeared in North America in the early 1900s, and has a sporadic distribution throughout the eastern US and Caribbean; rapid spread in the Northeast began around the 1990s.
Ecology and Habitat
Stiltgrass prefers disturbed, moist, partially shaded sites, such as roadsides, streambanks, utility corridors, and ditches. It typically occurs on clays and sandy or silty loam soils that are moist and nitrogen-rich, but it can also establish and persist on drier, disturbed soils.2 From there stiltgrass can invade relatively undisturbed forests (especially floodplain and mesic forests) and wetlands, where it can quickly become the dominant herbaceous plant in the understory. Stiltgrass tolerates full shade but thrives in the presence of moderate light (18-35%).2 A thick leaf litter layer inhibits seed germination, but not enough to prevent invasions into mesic forest, even with little seed input.3 Because deep shade and leaf litter inhibit stiltgrass, it is likely that nonnative earthworms (which reduce litter) and deer (which reduce shade from a browsed shrub layer) both contribute to its success.4
Reproduction and Phenology
Seeds germinate in early spring, and plants grow and spread by rooting at decumbent stem nodes throughout summer. The plant flowers in late summer and the seeds mature and disperse September-December. Stiltgrass is capable of producing large numbers of seeds, but seed production is reduced in drought or low light conditions.17 Seeds are dispersed by wind, water, humans, and other mammals, and may remain viable in the soil for 5 years or more. The fruits can attach to fur, feathers, and clothing, and seeds are often transported with soil material by heavy equipment.2 Roadways and walking trails serve as dispersal corridors. Seed germination seems to be highest in open (unshaded) sites with little to no litter.2 Leaf litter inhibits germination but increased moisture increases germination and survival even in deep leaf litter.18
Impacts of this species

The presence of stiltgrass changes forest soils, resulting in reduced leaf litter and organic matter in soil, higher pH and magnesium, and in some cases higher available phosphorous and calcium.5,6 As stiltgrass cover increases, native plant cover and diversity are often reduced,2,5 although this effect is likely due to a combination of stiltgrass, deer herbivory, and nonnative earthworm abundance.7 Stiltgrass excludes seedlings of woody species in eastern forests, potentially altering forest development.2 Stiltgrass-invaded understories tend to have increased aboveground biomass, which in turn can lead to increased abundance and diversity of arthropods8 (although sometimes these measures decline6). However, arthropod evenness tends to be reduced, as herbivores that can eat stiltgrass are favored.8 In sites with low available nitrogen and high stiltgrass biomass, carbon cycling can accelerate and result in significant declines in microbial biomass and soil organic carbon (impacting forest carbon storage on a large scale).9,10 Stiltgrass seems to be unpalatable to deer. The avoidance of stiltgrass and preferential foraging by deer on other plants favors the spread of stiltgrass by reducing plant competition. Stiltgrass cover was lower where deer were excluded;4 excluding deer and removing stiltgrass increased survival of oak seedlings.11 The replacement of forest understory shrubs and trees with stiltgrass may help explain declines in bird species that nest on the ground or in the understory or midstory.2 In a southeastern forest, American toad metamorph survival was reduced in stiltgrass areas, likely due to the increased density of predatory wolf spiders.12 The presence of stiltgrass can affect controlled burns in fire-adapted forests, raising maximum temperatures, reducing germination of native species, and stimulating subsequent growth of stiltgrass.13 However, this relationship varies with soil moisture, and fire in drier sites may not promote stiltgrass.14

In a Westchester forest preserve with overabundant white-tailed deer and a species-impoverished understory layer, stiltgrass provided favorable habitat for three native amphibian species.15 It may also provide important cover for white-footed mouse.2 Native insects, including grasshoppers, katydids, crickets, and bugs graze on stiltgrass, but are not known to significantly deplete a local population. Stiltgrass seems to be avoided by cattle, goats, and horses,2 but is grazed by sheep.16