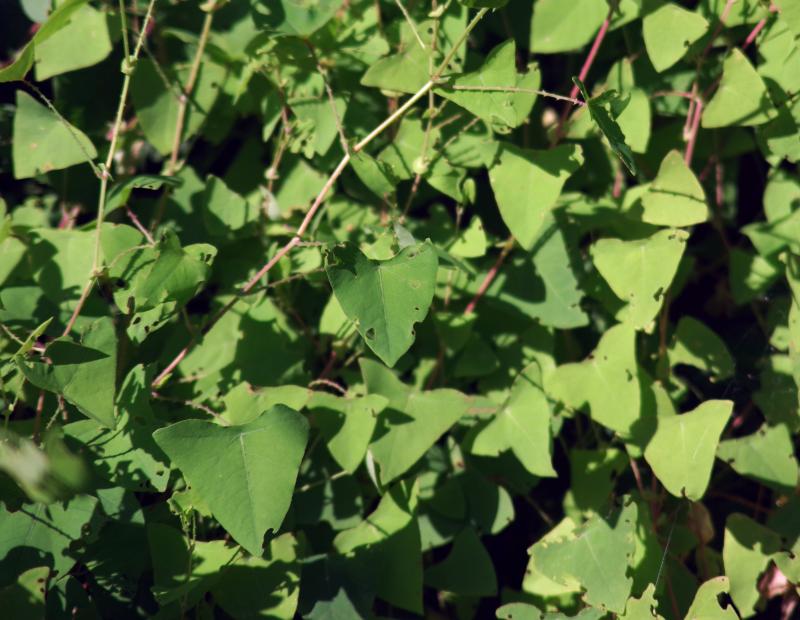 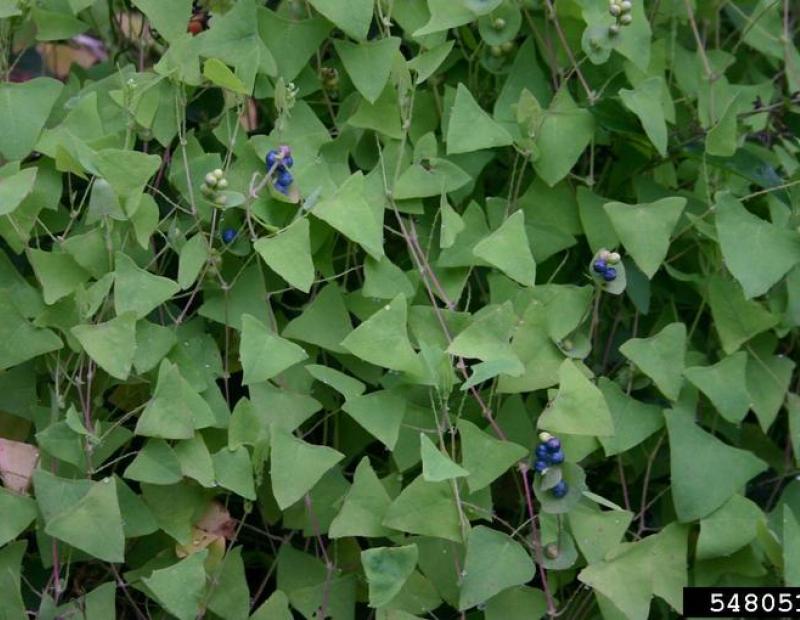 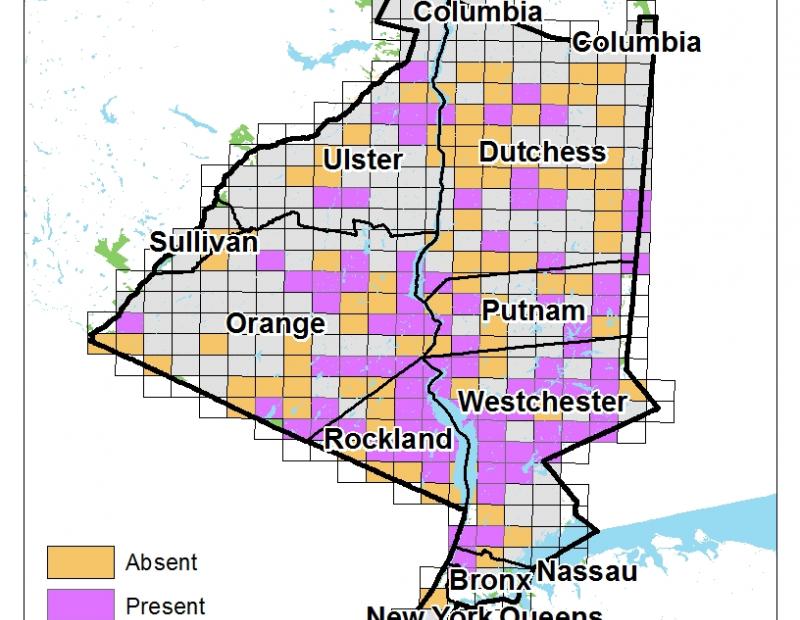 Mile-a-Minute (Polygonum perfoliatum L.) is a vine in the Buckwheat family (Polygonaceae). An herbaceous annual vine with recurved barbs on stems and leaf petioles. Light green color of the leaves contrast well with surrounding plants during the growing season. Stems redden with age and persist into the winter with an orange/red color.

Leaves
Leaves are alternate, smooth, waxy, light green and shaped as an equilateral triangle 1-3” on a side with entire margins.  Recurved barbs on petiole. Round ocrea at stem nodes.

Flowers
Flowers begin to bloom in summer and are white, small and inconspicuous.

Introduction History
Native to eastern Asia. It was introduced accidentally, with a shipment of Rhododendrons, to a plant nursery in York County, Pennsylvania in the 1930s and has spread to New York State from this location. Mile-a-minute vine is listed as a Noxious Weed in Pennsylvania.
Ecology and Habitat
Mile-a-minute exhibits the most vigorous growth in upland sunny locations. However it has been observed growing in shaded lowland locations, floodplain, edge, open meadow and roadside locations. Within the Lower Hudson PRISM, mile-a-minute has been found throughout in a variety of habitats.
Reproduction and Phenology
Reproduction is by seed. Fruit are deep blue and arranged in clusters. Immature green fruit may contain mature seeds. Seeds may be transported by mammals and birds. Fruit floats and may be transported downstream. Mile-a-minute has been frequently reported to be transported in ornamental/landscaping potting soil.
Impacts of this species

Mile-a-minute vine can grow very rapidly, up to 15 cm/day, and can out-compete native species by blocking available light. This can be a particular threat to forest regeneration, plant diversity and wildlife habitat. Dense thickets of these thorny plants are also a problem for recreationists and homeowners. This vine will grow over anything in its path, including trees.

Biological Control
Rhinoncomimus latipes – A stem boring weevil is available as a biocontrol for Mile-a-Minute.  The weevil lays eggs in stem nodes and adults feed on the leaf tissue.  It is effective at patch suppression and is reported to have eliminated patches in New Jersey.  The weevil is likely to be found at mile-a-minute infestations throughout the LHPRISM.

Manual or Mechanical Control
Pulling / Digging Up:  As an annual, the shallow root systems are very easy to pull.  Pulling is easiest earlier in the year before the spines have hardened.  If pulling when fruit is present, care should be taken as the fruit drops readily.

Mowing:  Mowing alone does not fully control the plant.  Even late in the season, after mowing it is capable of bolting and producing seed.

Chemical Control
Foliar Spray:  Low concentrations of glyphosate, 0.5%, are effective in killing mile-a-minute.  The waxy leaf cuticle makes it hard to get the herbicide to stick to the leaf.  Surfactants should be added to spray mixture.  Low pressure and small droplet size nozzles are recommended, 14 psi with 0.2gpm nozzle (yellow).

Pre-Emergent Spray:  Most pre-emergent herbicides for broadleaf weeds are effective.

It is likely that the biocontrol weevil is already present at most locations within the LHPRISM. Before conducting control of large patches check for weevil presence. The widespread nature of the plant in our region suggests that in some instances (ie large populations in close proximity to other populations) it may be best to rely on the biocontrol for suppression before implementing control efforts

Glyphosate (e.g., Roundup® for upland areas and Rodeo® for wetland applications), applied at a low rate will probably be effective in killing mile-a-minute weed. However, because this plant is not currently listed on the product labels for Roundup® or Rodeo®, treatments with these products is permissible only with prior approval of the State Department of Agriculture where the application will take place [FIFRA 1997, Section 2(z)(ee)].

Control of Mile-A-Minute Weed
While it is unlikely mile-a-minute weed can ever be eradicated, control measures are needed to limit its further spread and interference with desired plants. Until recently, little information existed on the control of mile-a-minute weed. Mechanical control, i.e., mowing, hand-pulling, and cultivating, appears feasible for small infestations; however, chemical control is generally needed for large scale control.

Similarly, McCormick and Hartwig (1995) showed that a number of herbicides commonly used in forestry were effective in controlling mile-a-minute weed. Pre-emergency treatments of Arsenal (imazapyr), AAtrex Nine-O, Velpar L., and Oust 75W, were very effective in controlling mile-a-minute weed as were post-emergence treatments of Roundup and Arsenal.

Virginia Department of Conservation and Recreation, Division of Natural Heritage
Control:  Herbicides may be used as an alternative in heavily infested areas. Spot applications of biodegradable glyphosate herbicides are recommended before mile-a-minute goes to seed in early August. As glyphosate is a nonselective herbicide which affects all green vegetation, it should be used sparingly to avoid contact with desirable vegetation which may be growing near the mile-a-minute.

Chemical: Studies have shown that pre-emergence applications of herbicide are most effective in controlling mile-a-minute weed, with the herbicides Oust, Velpar L, Arsenal, Aatrex, Pursuit and Pursuit Plus being the most effective. Roundup and Arsenal are best for post-emergence control (McCormick and Hartwig, 1995). Herbicidal soap, helps burn back foliage of P. perfoliatum. Because these products do not have the systemic (i.e., travels to the roots) ability of herbicides like glyphosate, they must be reapplied all season long to any regrowth. Glyphosate (e.g., Roundup for upland areas and Rodeo for wetland applications), applied at a low rate will probably be effective in killing the weed.

Green Industry News
Stanton Gill, Regional Specialist, Central Maryland Research and Education Center, University of Maryland, Cooperative Extension Service
Chemical control:  Mile-a-Minute leaves do not wet easily, so a surfactant may need to be added to an herbicide. Two broad spectrum, non-selective herbicides are glyphosate (Round-up and other brand names) and Finale. The seed from this weed germinates in late spring. Applying a pre-emergence that is effect against broad leaf weeds in late spring will prevent the annual germinating seeds from emerging.