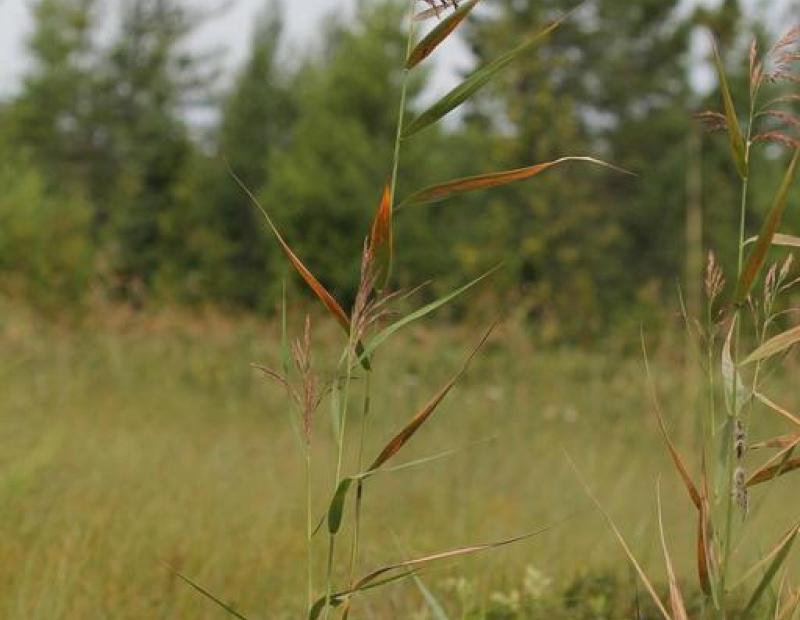 Phragmites australis is a tall, perennial grass that can grow over 15 feet in height. 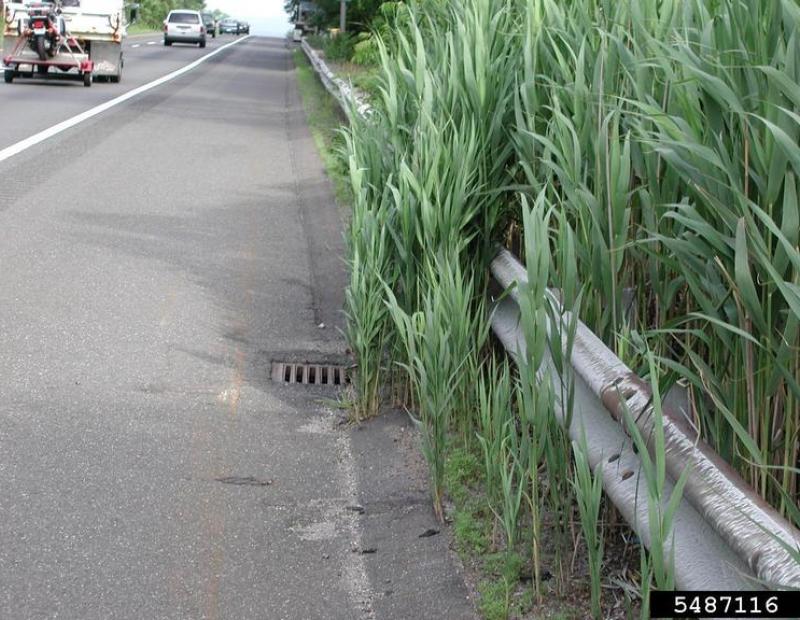 These grasses can grow in a variety of habitats and thrive in disturbed areas. 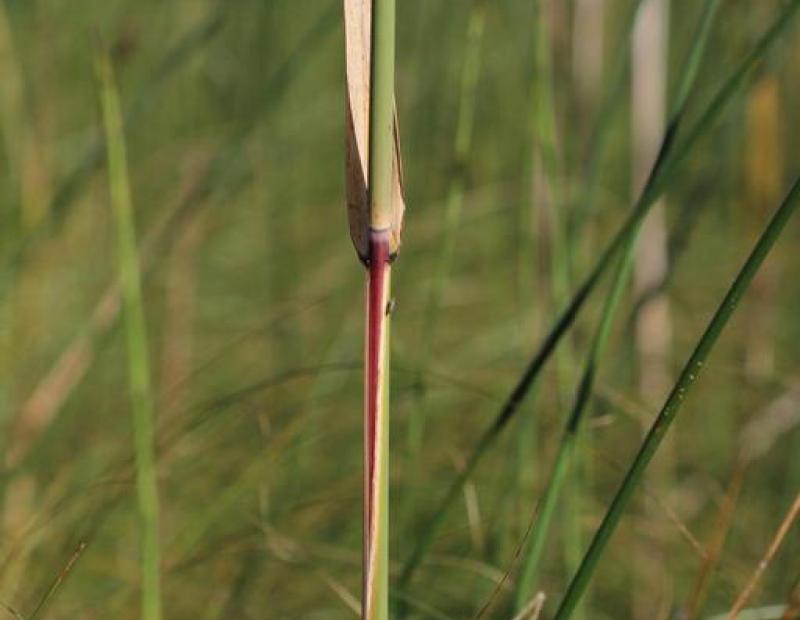 Stems are hollow, usually green with yellow nodes during growing season, and yellow when dry in winter 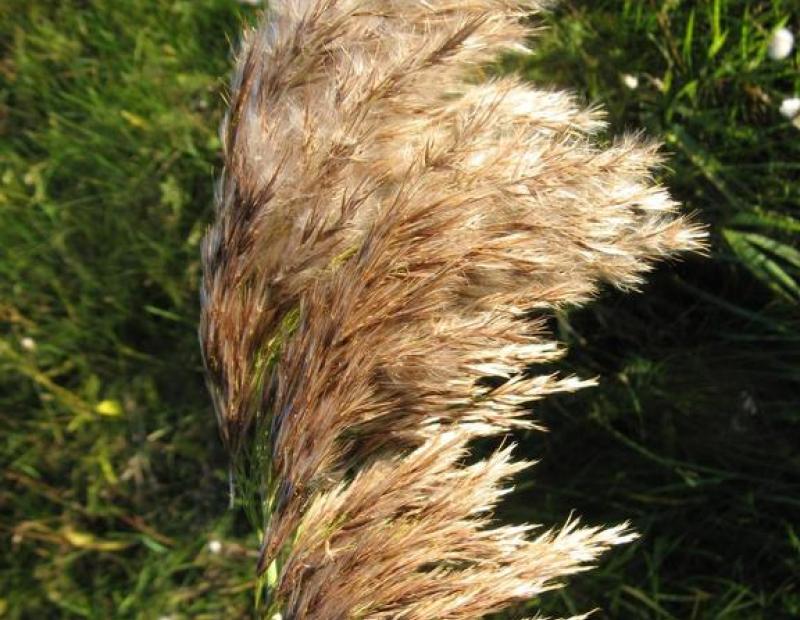 White to purple flowers, surrounded by silky white hairs, are seen on spikelets on the tops of the stems. 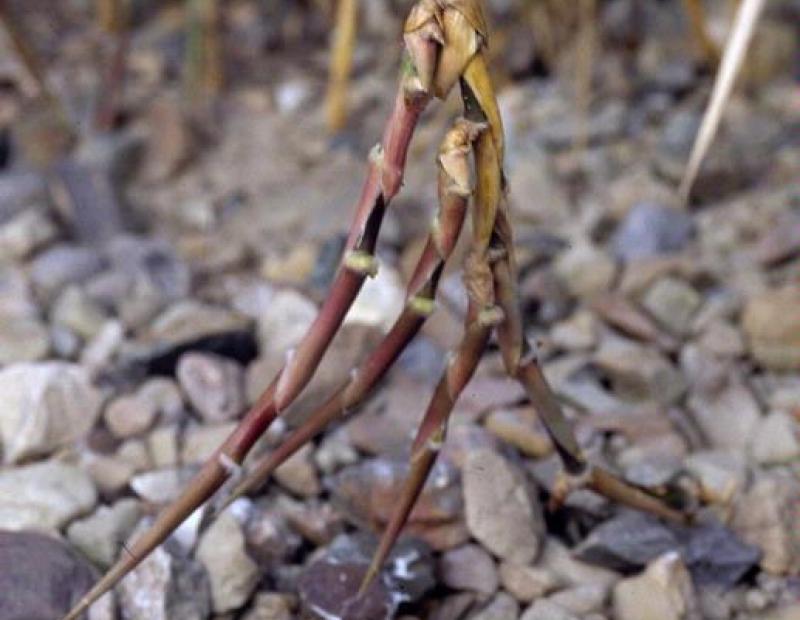 Root growth is profuse, and roots can spread 10 or more feet and several feel deep in a growing season. 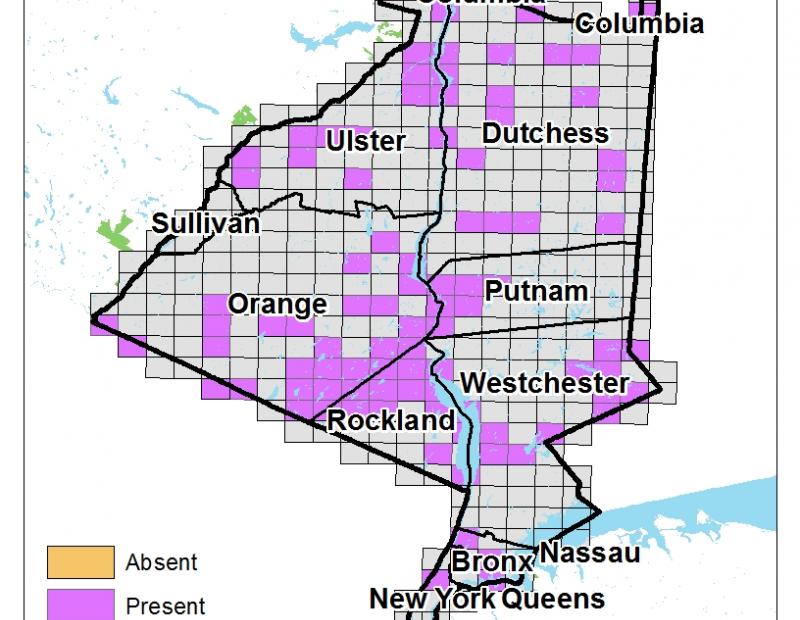 A very large, perennial grass, reaching a height of 1-3.5 m (or more), often found in extensive, dense stands in wetlands. Stems are stout, unbranched, and hollow, bearing long, flat leaves on one or two sides. Rhizomes can grow to 20 m long. Large, feathery, plumed flower spikes are produced in August and September and often persist through the winter.

Introduction History
The Old World subspecies of common reed is native to the Middle East and Europe, and is one of the most widespread and successful invasive plants around the world. It occurs in most regions of the US, from southwestern deserts to eastern salt marshes to northern lakes.
Ecology and Habitat
Common reed is most often found in wet or flooded areas around marshes, ponds, lakes, ditches, streams, and rivers. It can tolerate brackish conditions up to about one-half seawater salinity, although it is more vigorous in fresh or slightly brackish water. It is also common on disturbed upland soils. It prefers full sun, and is shorter and sparser in shaded conditions.2 In Canada, roadside ditches shaded by shrubs or trees were less likely to support common reed than unshaded ones.4 Along the Hudson River, common reed is found in the supratidal and upper intertidal zones, and sometimes in the middle intertidal zone.3 It usually becomes established at the upland edge of a tidal marsh, along a stream bank or pool margin, or in a fill deposit, and spreads until it encounters an obstacle such as deep water.3 Storms and soil disturbance appear to be important for dispersal and establishment, but stands reach highest densities in the absence of soil or grazing disturbance.2 Nutrient enrichment favors reed establishment and spread.
Reproduction and Phenology
Common reed mainly reproduces vegetatively, via its spreading rhizomes (underground stems) or stolons (aboveground horizontal stems), as well as rhizome or culm (aboveground stem) fragments. It can grow up to 4 cm/day. Rhizome fragments are commonly spread through water (especially due to storms and flooding) and passively by machinery, humans, or other animals. Reed produces at least some viable seeds, and seeds are thought to contribute to reed establishment and spread under certain conditions.
Impacts of this species

Common reed tends to form dense, extensive, high-biomass colonies. It can substantially modify soil, hydrology, microclimate, and vegetation.3 The interior of a dense reed stand often contains very few other plants. Along the outer margin other plants are commonly admixed, often (at upland edges) including dense vines which use the sturdy grass for support. Reedbeds have supplanted cordgrass (Spartina)-dominated plant communities in brackish tidal marshes, cattail (Typha)-dominated communities in tidal fresh or brackish marshes, and cattail or sedge (Carex)-dominated communities in nontidal marshes and wet meadows. While the density of common reed leads to the supposition that it reduces native plant diversity, colonies may have become established on bare soil, or supplanted a low-diversity, dense stand of a native species such as cattail.3 Removal of common reed often increases native plant diversity, but this phenomenon is generally short-lived without active management.3 Compared to areas dominated with cordgrass and other native salt-marsh vegetation, older reedbeds have less varied wetland microtopography; reduced populations of salt-marsh breeding birds; lower levels of breeding bird activity in general (although some birds, such as red-winged blackbird and marsh wren, prefer to nest in reed); reduced abundance of wintering waterfowl; and decreased use by larval and juvenile mummichog.3

Wetlands and other habitats that have been altered by the disruption of natural hydrology, the addition of fill or pollutants, or other effects of human land use and development may benefit from the habitat values and environmental services of reedbeds. Also, individual reedbeds vary greatly in their ability to provide those values and services based on variables such as stand density, hydrology, etc. Common reed plant parts are eaten by muskrat, eastern cottontail, white-tailed deer, and various insects—including larvae of Henry’s marsh moth (Simyra insularis) and broad-winged skipper (Poanes viator).3 Various bird species forage on the abundant reed scale (insect), insects overwintering within the reed culm, and seeds. (Common reed supports a higher insect biomass than cattail or purple loosestrife.) Reedbeds provide favorable roosting habitat for nonbreeding songbirds, short-eared owl, and other birds, as well as nest sites for certain species. Most livestock will graze on young shoots of common reed, which provides moderately nutritious forage; horses and sometimes cattle also eat the mature foliage. Dense stands provide cover and protection from humans and other predators for mammals such as deer, raccoon, striped skunk, bear, and muskrat. The deep litter layer provides shelter for small animals and food for decomposers. Fish communities are generally comparable between reed and other tidal marsh communities.3

Common reed has a high tolerance for pollution. It sequesters heavy metals, rather than releasing them into the water column. It is commonly used for wastewater treatment and sludge dewatering in water treatment plants. Reed builds up the soil level due to high biomass production and slow decomposition. Dense beds increase sediment deposition and stabilize soils. This can dry wetlands, and decrease access to fish, crabs, and shrimp in tidal wetlands, but the same properties can benefit wetlands in danger of flooding due to sea level rise, or at risk of shore erosion from storms.5