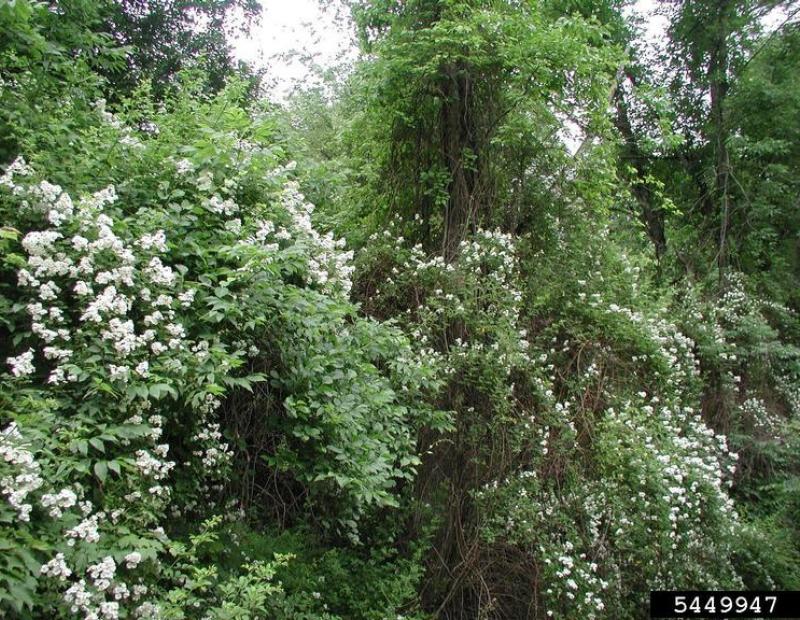 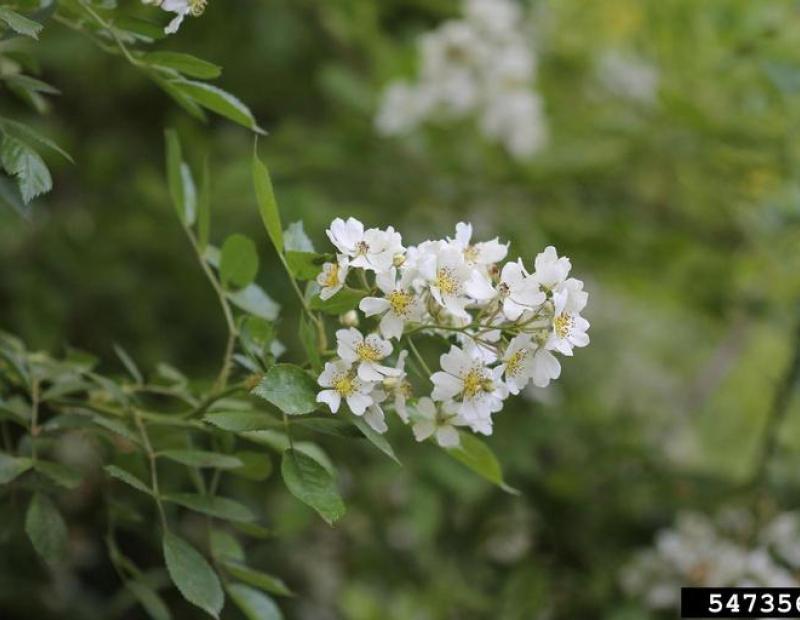 Multiflora rose flowers are five-petaled, are clustered in groups and appear in early spring in the Hudson Valley 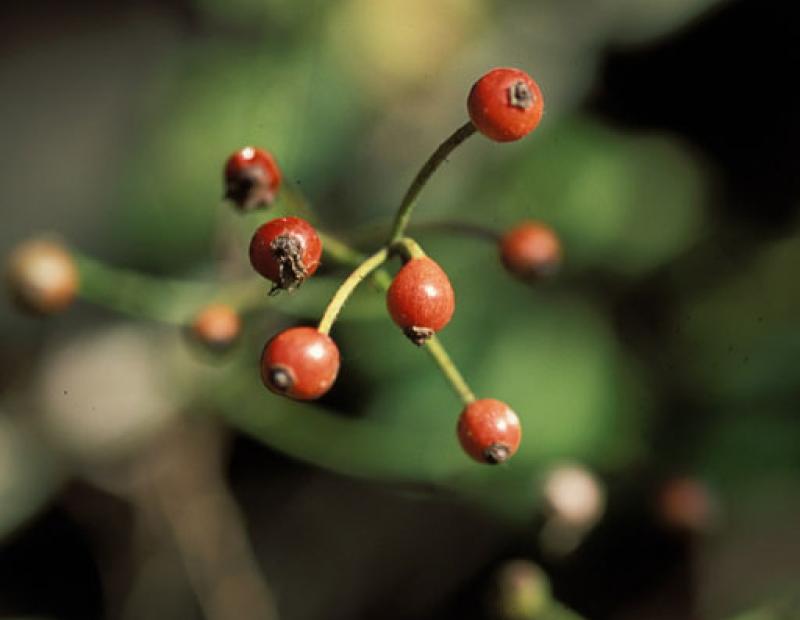 The rose hips are small, can persist throughout the winter and contain 6-12 seeds. 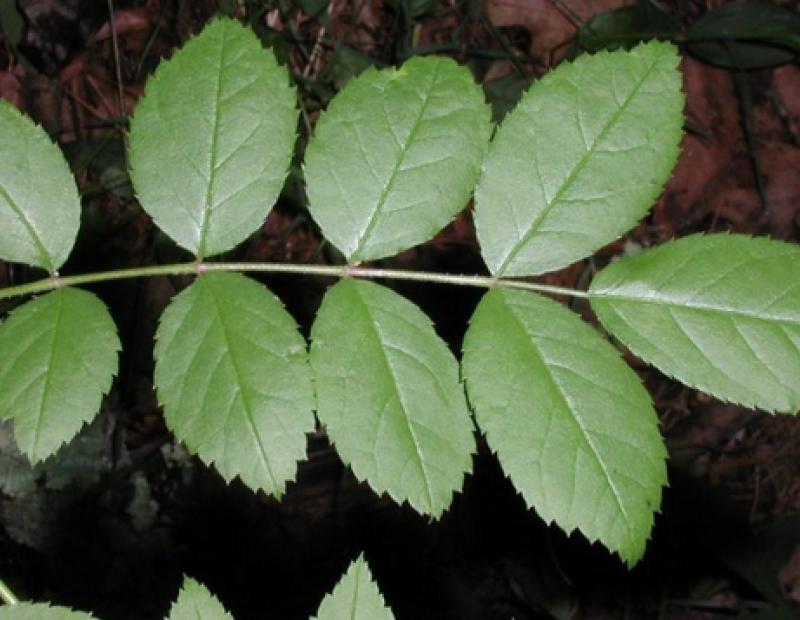 The leaves of multiflora rose are compound with an odd number of leaflets that are each serrated.

The fringed stipules at the base of each leaf are an important key diagnostic characteristic of multiflora rose. The thorns of multiflora curve towards the base of the stem and make removals difficult (and painful!)

« »
Key Characteristics
Leaf
Compound leaves with toothed edges; odd number of leaflets (has terminal leaflet). At base of each leaf is a "fringed stipule" which looks a bit like a caterpillar!
Flower
Clusters of small (about 1.5 inches across) white fragrant flowers that appear in May-June
Stem
Hooked thorns resemble dorsal fin of shark and curve towards base of stem
Fruit
Small red, oblong/oval shaped berries appear in fall and persist throughout winter

Rosa multiflora is a perennial shrub that typically grows to be between 1.8 to 3 meters tall, and is notable for its small white flowers that bloom in May or June. They have multiple arching stems that vary between green to red in color. Stiff, arching thorns are found along the length of the stems.The leaves of this plant are about 1-1.5 in. long, and compound with an average of 7-9 leaflets. They are oblong and have serated teeth along the edge of them.  Small, red rose hips that are found on the plant persist through the winter. Its primary diagnostic feature that distinguishes it from native roses are the fringed stipules that are found at the base of each compound leaf.

Introduction History
Multiflora rose was first introduced to North America from Japan in 1866 as rootstock for rose cultivation. By the early 1930s, it was being planted for erosion control, wildlife cover, and livestock fences. Today it is naturalized widely in the US, and is one of the most common invasive species in the Northeast and Midwest.
Ecology and Habitat
Multiflora rose is most frequently found in oldfields, pastures, and along farm fencerows, roadsides, and forest edges. It can also be abundant in forests and shallow wetlands and along stream banks. As with many other invasive shrubs, multiflora rose will tolerate a wide range of soil, light, and moisture conditions, though it thrives especially in high-light situations with welldrained soils. (1) As an oldfield develops into forest, multiflora declines (2) In a Pennsylvania deciduous forest, occurrence and abundance of multiflora rose was best predicted by a land use history of agriculture, mining, or logging, and occurrence was more likely near roads (3)
Reproduction and Phenology
Multiflora rose blooms in May-June; fruits develop in late summer-fall, and often remain on the plant through the winter. A single plant can produce as many as 500,000 seeds per year, and the seeds can remain viable for up to 20 years in the soil, allowing the rose to quickly overwhelm a newly colonized site (1) Seeds are dispersed widely by many birds and mammals. Multiflora also spreads by sprouting from roots and branch tips (1)
Impacts of this species

This shrub grows vigorously, and often forms dense thickets, impenetrable by humans, outcompeting native plants for resources and space. It lowers pasture quality for cattle, replacing edible forage, and can lower crop yields in fields adjacent to a multiflora hedge (4) Multiflora rose can establish in forests, and may have a negative effect on native understory plant abundance or richness, but strong evidence is lacking. In a Midwestern deciduous forest, a negative trend in native understory plant richness was best explained by a combination of the densities of two nonnative earthworm species and cover of multiflora rose (5) Birds that nest in shrublands and forest understories often nest in multiflora. In some cases this has been shown to reduce nesting success compared to nesting in native shrubs (e.g., for northern cardinal and American robin in more developed areas). (6) In other cases this rose appears to provide good nesting habitat (e.g., for the same species in less developed areas (6) for veery in forest understory (7) and for gray catbird and chestnut-sided warbler in shrubland). (8) In an oldfield, higher densities of multiflora resulted in higher rates of maple seed predation due to the higher densities of white-footed mice (9) with implications for both altered forest regeneration and abundances of small mammals and their predators.

Multiflora rose provides high-quality habitat for many mammal and bird species, including mice, opossum, eastern cottontail, bobwhite, and songbirds. The hips are consumed by many species of birds including ruffed grouse, wild turkey, cedar waxwing, and American robin. Leaves and hips are consumed by many mammal species, and the hips may be especially valuable to wildlife in winter. (1) White-tailed deer can control multiflora rose to a certain extent by browsing; in a long-term exclosure experiment, multiflora was almost four times more abundant in the absence of deer. (10) Goats are even more effective browsers. (11) Multiflora rose and other invasive shrubs can provide important habitat for New England cottontail (a Special Concern species in NY) in shrublands and young forests. (12)